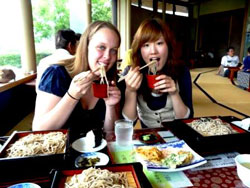 Prior Language Knowledge: Sukoshi (a little) - just the basic Japanese greetings and some Spanish in high school

Where did you go? Kumamoto, Japan

When did you go?: May-June 2009 (One month with Scott Harris' MSUB Business Faculty Led Trip)

Why? "Before, I had gone abroad for Martial Arts and spent two weeks in China, Japan, and South Korea. My favorite country of the three was Japan. Also, I was able to get credit for going abroad and having the experience of going to Asia."

Would you do it again? "Yes. I would especially go somewhere for longer if I knew the language and had the resources. I am planning on going back to Japan next Christmas and New Year to see my host family and the friends I've met here from Japan at MSUB. I'd also like to go to Europe -- Germany or Austria where it is beautiful." 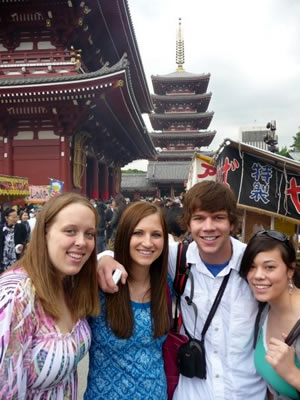 What was your favorite part?"What I liked about Japan was experiencing the culture. It is so different from American culture. It is completely different." Harris was telling me of an example of just how different Japanese culture is from American. She was in Tokyo and it is the most populated place, but the crime rates are so low. She told me how everyone lived by the honor system. One of her friends left her camera in the subway bathroom. When they boarded the train and departed from that stop they realized it and went back to this stop after only traveling one stop. By this time her camera had already been found and turned into lost and found. Harris also told me how much she enjoyed the deep baths that the Japanese had each night to relax them, and when she was done she was able to enjoy walking across heated floors.

What was your least favorite part? There really was not too much that Harris did not care for, but there was the little annoyance that a drink of soda did not receive free refills. Additionally, Harris experienced sorrow as she left Japan. After a lively learning experience she did not want to return home so quickly.

What was the easiest thing about the study abroad experience? "The application process was only a page long and I had to write a short paper, but it was such a simple process that I would do something ten times longer just because of what I experienced in Japan!"

What was the hardest thing/challenge you faced studying abroad? Traveling abroad Harris did not face hard challenges that she could not easily overcome. The most difficult aspect of the whole ordeal was transitioning back to daily life.

How has this study abroad affected your life now?

"This study abroad program has changed the course of my life!" Since she has been touched by the culture and people of Japan, Harris now wants to go back and teach English. Harris exclaimed to me, "I had my life planned and then it changed my plans!"

What advice/words of wisdom would you offer students interested in studying abroad? "Put all your fears aside and just do what you need to do to study abroad! Do not hesitate to engage in something that has the potential to change your life and open up your eyes to the world around you. It will truly change your life, so do not let anyone talk you out of it--I almost talked myself out of it."